What is Shaquille O’Neal Shoe Size?

Shaquille O’Neal, a legendary basketball player, is known worldwide because of his NBA participation and performance. He took part in 20 seasons of the NBA and was four times titleholder. Shaq was also selected for the 15 All-Star Game, which is an outstanding achievement. The gigantic size and height have some parts behind his success, performance, and worldwide popularity.

His feet are bigger than an average American. Because of that, he used to get an extra bit of advantage in the court. Many people worldwide still wonder how big his feet are and what Shaquille O’Neal Shoe Size is. Shaq was way bigger than his other team members and opponent players, so were his feet.

Who is Shaquille O’Neal?

Shaquille O’Neal is one of the most decorated NBA superstars of all time. This NBA superstar was born on the 6th of March 1972 in Newark, New Jersey, in the USA, and took his education from Louisiana State University. Then in 1992, the NBA team Orlando Magic drafted Shaquille O’Neal into their squad via NBA draft.

He performed exceptionally well and caught everyone’s attention in his first season because of his gigantic figure. Along with that, Shaq won Rookie of the Year in 1992-93 NBA season. Because of his fantastic performance on the pitch, the Orlando Magic managed to get into the Finals of NBA 1995.

In the next year, Shaquille O’Neal moved to the famous Los Angeles Lakers from the Orlando Magic. While playing for them, Shaq won three consecutive titles from 2000 to 2002 and became of their most valuable players. After leaving the Lakers in the 2006-2007 season, he played for four other teams before retiring.

At first, Shaq joined the Miami Heats after leaving the Lakers and then joined Phoenix Suns. After that, he came to the Cleaveland Cavaliers and then Boston Celtics, and he spends one year in both of these two teams. Shaq took retirement from his professional NBA basketball career after the 2010-2011 season when he was 39 years old.

Height of Shaquille O’Neal from His Childhood till Now

From his childhood, Shaq was taller than the average boys and teenagers as well. When he was only four years old, his height was over 3’10”, which shows the growth of his body has always been above average. At the age of 8, his height had reached 4’8 3/4″.

Even before reaching his teenage, he was as much tall as an average American man. Because he was 5’10” when he was only a boy with 12 years of age. When he was a freshman in school at the age of 16, he was 6’6” tall, which was gigantic considering a teen of his age.

By seeing his height and gigantic body, his parents inspired him to participate and make a career in sports, especially basketball. When he joined NBA with the Orlando Magic team at the age of 21, he had crossed the barrier of 7 feet, and his height was 7’1”.

Since then, his height has remained the same till now. It makes him one of the tallest NBA players of all time with a successful and decorated NBA career.

As Shaq was taller than average boys, teenagers, and men throughout his age, his shoe size was also above average. From his childhood, he needed larger shoes to fit in his feet. Now let’s take a tour in a detailed discussion on which age, Shaq used which size of shoes with some other interesting information:

At the Age of Four

When Shaquille O’Neal was four years old, he was 3’10 ½” tall, which is 118.1 in centimeters. It was way above than a boy who is only four years old. His weight was 56 pounds at that age, and it is equal to 25.4 kg. An average boy of four years old usually requires a shoe size of 10.

But because of Shaq’s height and weight, his feet were long and wide as well compared to average feet. So, he required a bigger shoe size to bear the body weight, and his shoe size was 12 when he was a toddler with fours of age.

At the Age of Six

Shaquille O’Neal’s height kept rising at a rapid pace throughout his early age. As a result, when he was only a boy of 6 years of age, his height had reached 4’3 1/2″. If you measure in meters, he was 1.31 meters tall at such a young age.

At that time, his weight was 82 pounds which is equivalent to 37.2 kilograms. Boys at this age wear shoes with 13.5C size, but Shaq needed a shoe size of 2 when he was six years old. (According to U.S. shoe size chart, when toddlers shoe size exceeds 13.5, then again starts from 1 and goes on)

At the Age of Eight

Shaquille O’Neal was almost 5 feet tall at the age of 8 as he was 4’8 ¾” tall then. On a meter scale, his height had reached 1.44 meters at that time. His weight had crossed the 100 pounds barrier, and it was 108 pounds back then. In kg, his weight was 50 kilograms at the age of only eight.

At the Age of Ten

Shaq’s height was 5’3 ¼” when he was a boy of ten which is the same as 160.7 in centimeter. He gained weight at a rapid pace as well as his weight was 139 pounds which is equivalent to 63 kilograms. So, his feet became larger, and he needed bigger shoes. As a result, his required shoe size at ten was 7 ½.

At the Age of Twelve

Just before entering teenage, when Shaquille O’Neal was twelve, his height was 5’10”. So, his height was the same as an average American when he wasn’t even a teenager. His weight had reached 192 pounds (87.1 kg) at that time. His shoe size had also increased as he gained more height and weight rapidly.

At the Age of Sixteen

At the age of sixteen, Shaquille O’Neal was in the middle period of his teenage. Back then, his body height was 6’7”, and he had crossed the barrier of 2-meter height on meter scale. In this period, he gained more weight than ever before, and his weight was 265 pounds (120.2 kilograms).

His feet also became longer, wider, and they had to bear more weight because of the increase in body height and weight. As a result, his shoe size jumped to 15 when Shaq was a teenager of sixteen.

At the Age of Twenty-One

When Shaquille O’Neal was twenty-one, he joined his first professional NBA team, the Orlando Magic. Back then, Shaq had crossed the 7 feet height barrier as his height was 7’1” (2.16 meters). His weight became 300 pounds which is equivalent to 137 kg on kilogram scale.

As a result, Shaq’s shoe size became 20 because of his bigger and wider feet.

At the Age of Twenty-Five

At the Age of Twenty-Five, Shaq was at the starting point of the peak point of his NBA career. His height remained the same as it was when Shaq was twenty-one. But he gained a bit more weight in this period, and his overall weight became 310 pounds (140.6 kg).

His required shoe size when he was twenty-five became 22 from 20. Throughout the rest of his career, Shaquille O’Neal used shoes with the size of either 22 or 23. Based on comfort, he used these two shoe sizes whenever he entered into the pitch.

After his retirement, Shaquille O’Neal took a great initiative to make basketball shoes affordable for everyone. That’s why he launched a shoe brand named “Shaq” with the partnership of Walmart. Now let’s take a look at one of the best and affordable Shaq shoes: 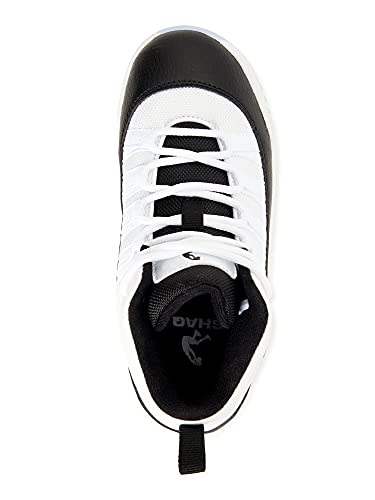 The Shaq Shoes were introduced by the famous NBA Hall of Famer Shaquille O’Neal. This Shaq Ice Retro Basketball Athletic Sneaker is part of a plan to produce basketball shoes for kids and teenagers at an affordable price. It comes with a high-top design and is available in two different color variants.

It has been made with high-quality built materials like PU leather, Mesh, and Thermoplastic Rubbers. These things keep the basketball sneaker durable for a longer period. The soft and comfortable upper shoe body helps with an easy-on and easy-off fast strap. You will also find stylish ice bottom in this unique Shaq basketball sneaker.

It comes with a lace-up closure system which is there to provide a snug and comfortable fit. You can also customize the fitting as per your need for comfort. Because of the soft foam cushioning inside, you will have comfort all along the wearing time. This shoe is also easy to wash, and you will require soft detergent for that.

As one of the most successful and decorated NBA superstars, fans have a huge fascination about Shaquille O’Neal. He is one of the tallest and most gigantic players ever played in the history of the NBA. Because of all these, fan’s craze on knowing more about him increased and it’s still increasing.

As a result, they also want to know about Shaquille O’Neal Shoe Size because of his gigantic feet. You will get to know about his shoe size from his childhood till now by going through this discussion.

Shoes Plans is a preview network that deals with the stylish, up-to-date, fashionable, as well as elegant foot-gear to make your steps with full of confident. It, as well- details on the popular shoes-brands and online store for fashion-savvy.